exaggeration is my only reality 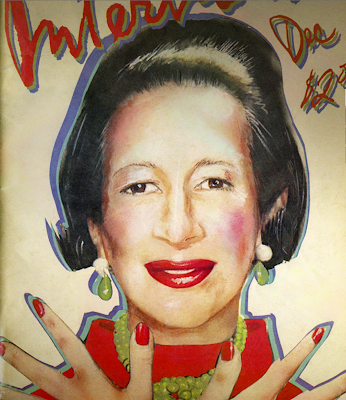 Diana Vreeland (1903-1989)
Diana Vreeland is the women who made it okay for women to be EXTRAORDINARY! Born in Paris. Married Thomas Reed Vreeland in 1924 gave birth to two sons then moved from London to New York City. She was a noted columnist and editor in chief for the fashion magazines ; Harper's Bazaar 1937-1962 then Vogue from 1963-1971 and the Costume Institute of the Metropolitan Museum of Art New York. She discovered Lauren Bacall and worked with many later become fashion icons today like Richard Avedon, "youthquake" star Twiggy, Edie Sedgwick and Jacky O. This is Vreeland's documentary film chronicling D V's fifty year reign as the “Empress of Fashion". Must see! if you are in the magic of fashion.

"The only real elegance is in the mind ; If you've got that, the rest really comes from it. "
dianavreeland.com